Need to be reviewed. I'd some help /contrib

In a few desires of a sort (the hand of spell) of crazy auto ethnography I had decided to throw on walls a little description of my practices in garage biology. The #BioMonstration quickly came to give a signature as a marker to this loose thread, a blinker beacon in the formulation of my thoughts.

A sticked graffiti out that emerges without coherence of frequency when at the same time a desire to share crossbreeds a belief, or a hope, that I can describe simply a small piece of something bigger.

Rather than forcing a restructuring of this proto canvas, I wish to retranscribe it here such as it pours from my imagination on walls of the Internet. In the order in which appeared these emanations of a pseudo disorder, of an obscurity or a fog perceived by the uninitiated person.

It’s when you correct a sequence in your code of a living thing.

Not to be confused with slaughtering

Demonym of person who does & lives in the laboratory

A bit like a Hi-Fi tech ( High fidelity) system frame to see non-chromosomal DNA, often provided by bacteria or in baker’s yeast…
Bacteria and yeast that humans spread all over their plasma screens

Ethnonym for a group of people living outside the disciplinary cell of biology, sometimes willing to enter it.

Ethnonym of a group of people who broke into the disciplinary cell of biology and who craft to smash chains, walls, and bars.

Formulation with digit encryption like of the CAFFEINE by the disciplinary cell of chemistry. This one probably thinking that encipher quality would offer enough safety to keep the said substance safe at home.
(YouHaveBeenPwnd)

I say to myself that I can continue this thread with a #BioMonstration with the intention of micro-narration a little differently from practices in the study and manipulation of the living.

Sort of (auto)ethnography peppered with fabulation

Before the continuations, hop the ears in Bio Is The New Black: Design embarked in a laboratory of biology
https://cpu.dascritch.net/post/2021/06

Remark:
it is mentioned in the episode that the Design could have as first historical emergence the year 1750

As a scientific discipline.

“The positivist in biology avoids metaphysical concepts by making a reduction in his questions. Thus, when François Jacob declares that “life” is no longer studied in laboratories, one can understand that the concept of “life” is similar to the old abstractions of metaphysics. What happens in the laboratories? We study redox relationships, methylations, different reactions between molecules: but do we ever see “life”? Instead of “life”, positive biology studies the properties of one of the levels of organization characteristic of living organisms (individuals, products, cells, molecules).
One could call up other examples: does biology study “the animal” or only action-reaction sequences, or does it study the action-reaction sequences, reflexes, stereotyped behaviors? Does it study “the human” or only its physiology, its social behaviors?”

“we extracted and sequenced a DNA in the wetlab”

Thanks to Kaerhon for clarifying this important point 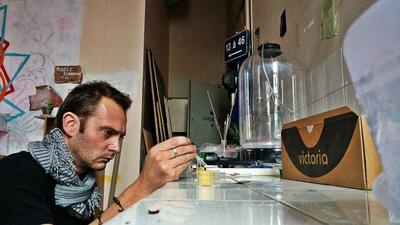 took the liberty to continue directly from where ya stopped, with just the text (ya may have to recheck vocabulary to smooth things out, some of the links and add in the images, of course)

It’s Monday, I tidied up and cleaned my bench to get back to work.

A work surface that in biohacking / biopunk / #diybio you struggle to do yourself, then becomes one of your most frequent work areas.

Does it hardly bear its qualifier of “plane” so much it plays and unfolds phenomena and events that destabilize, even crush, many of our established plans?

Who is haunting who?

I often think about it at night, sometimes I feel trapped in its dithering.

“Large canvas envelope, usually filled with straw, with which a bed was lined.”

There is not a prisoner who does not turn over in the evening on his straw mattress at the thought that the dawn may be sinister, who does not fall asleep without wishing that nothing would happen. - (Henri Alleg, The Question, 1957)

Monstration could have a double semantic origin in Latin with a double meaning.

MONSTRO, AS, ARE, AVI, ATUM: to show, to make see in a precise manner. To indicate.

The thing that is indicated, pointed out, with the finger.

And also monstrum: an unexpected fact that may be interpreted as a “warning” from a higher power. And monstrosus, which means bizarre, even deformed.

Incubator that breaks down

The malfunction, the bug, the breakdown, the ‘disobedience’, the strike or more generally the ‘accident’ (in Virilio’s words) are generators of saturated spaces (of messages, of pollutions) each fulfilling a fairly precise function. Starting with allowing one to get out of a state of stupor, to ‘get going’, to un/tangle oneself (thanks to Olivier Ertzscheid)

It is also an opportunity to reconfigure ourselves collectively

For example, at a 2-day biohacking workshop in a library… Right from the start, one of the devices was broken.

This opportunity was seized by people not initially interested in the workshop, and with profiles very different from the initial participants, to insert themselves into the group and to “twist” the initial “programme” (march) of the workshop to make it their own and to give it a new function / purpose.

Sending plasmids, passionately prepared and packaged on a heat-screw machine in free material

On a small piece of paper… heading for Ukraine.

This manipulation brings back memories of a Pasteur Institute from the 1920s that we never knew.

We dodge borders, customs. The mark is invisible after drying.

They are even little Frankensteins (sic) for some people who have not yet discovered and practiced, not yet experienced in their flesh.

This aesthetic of the stamped letter allows us to pass under the radar.

Our gesture folds into itself and on an infinitesimal layer an immeasurable quantity of time, technique and acquired knowledge.

It also requires a new critical thinking about correspondence and letters to emerge and develop.

Enclosed, annotated, the plasmid will travel to a new adventure.

Messenger ribonucleic acid carrying something, when at some point in transcription the pre-messenger RNA escapes from inside the RNA polymerase complex (“away, to the right, fleeing fate”), which gets added to it by an enzyme, this is RNA guanylyltransferase which adds a guanosine (G) on the 5’ end.

This cap has several purposes

Who comes to my salon, my garage, or my lavaboratory to do a cap ¹ haircut?

Come and watch the hairdressing or scissor day!

DNA that propagates through the genome using proteins encoded by other gene sequences, with no immediately visible benefit to the organism.

1.selfish DNA has the ability to maintain, accumulate and transpose itself.

This “junk” DNA, that part of the genome which at first glance serves no purpose (the kind that pisses off capitalistic productivists?), well, actually plays an important role in epigenetic processes.

Vocabulary of biology at LégiFrance

Let’s think about Barbara McClintock, who made this discovery, and one of the 58 women (including Marie Curie twice, and her daughter Irène Joliot-Curie once) who won the Nobel Prize (1983 medicine and physiology), compared with 885 men.

Junk DNA was indeed a term used before we knew what these sequences meant. Nowadays, we could discard this term and use instead Potentiated DNA to take up a distinction made by Stéphane LUPASCO between what is latent (potential) and what is present (actual).

Who am I? What invisible others make me what I am?

My body is made up of about 10 to 100 times more bacterial cells than human cells.

I am 10 times more non-human genes than human genes!

I am billions of billions of bacteria, fungi and spores, parasites and micro-insects, viruses, yeasts, archaea… On me and deep inside me.

I am alive through and with the lives of others.

When this is ready we can merge with the first post and link to the public post.

why not just “became”?

eager to or keen to?

by making a reduction

by performing a reduction?